The "Cecilia in thesis land" series in Phdcomics ends on a positive note.. thanks, Jorge :)

Open day at IISc showed the same thing. It might get dreary at times, frustrating most of times, and at several points you wonder if it is of any consequence, this thing that you are doing. But, then , you realise, Science is all about this, and, no matter what the downs are, this life is rather curious :)
Posted by Bastet at 11:46 AM No comments:

A blank space – indeed how does one begin to describe a blank space? On the very face of it, the phrase appears to be a tautology, with ‘space’ itself meaning ‘a vast, unoccupied area’. As darkness is defined by the absence of light, the blank space can be defined by the absence of substance. But, on a second thought, one sees that a blank space holds innumerable possibilities for interpretation.
To a painter, it is an empty canvas, pregnant with myriad possible paintings to be made. To a teacher it is an innocent child’s mind, ready to be taught and eager to learn. A sculptor would see it as a beautiful piece of stone, waiting to be carved into his next masterpiece. It would remind the farmer of a land to be cultivated; and the builder, of a land that can be developed into a luxurious and profitable layout. A dancer would liken it to an open stage and a writer, to an unwritten page. The lover would see in it, a place where beautiful day dreams can be woven.
To the thinker, it is the absence of cluttering. The yogi says it is the beautiful calmness and peace of mind; while to the spiritual, it is Nothingness, the point at which one sublimes and merges with the Supreme.
A nature activist sees a blank space as a place of extensive deforestation. To the depressed it brings pictures of bleakness, while the psychiatrist would call it a representation of Alzheimer’s disease. To the destitute, it is home.
The beauty of the blank space lies in the eyes of the beholder – unadulterated and pure, or, barren and devoid of life. A pristine landscape waiting to be explored or a frightening ruin that drives away even the whiff of joy. A blank space is, thus, an externalization of our own mind. Our thoughts are what we see in it. When we calm our mind and drive out disturbing thoughts, it becomes the blank space that can be moulded into countless possibilities.
Posted by Bastet at 10:20 AM 8 comments:

Why does this strike a chord??? 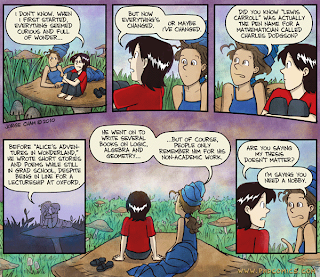 Posted by Bastet at 2:09 PM No comments:

10 reasons why one should have water crisis in hostels.

1. You get to tune your body clock according to water availability timings - you can probably publish a Nature paper titled "Rewiring the circadian rhythm - a study on effects of water availability on the human wake-sleep cycle" .

2. You can kick bad habits like getting up at 6 AM, as you don't get water till 9 in the morn.

3. The long walk from your room to the only bathroom in the hostel that has water, on the floor below yours, can prove to be the morning walk you always wanted to take, but were too lazy to actually go on.

4. You can experience emotions which you never thought you were capable of - like the murderous rage that hits you when you see the unkempt lawns in front of the main building being watered incessantly, when you don't have water for basic needs.

5. Your mind gets sharpened and inhibitions lowered; and you come up with crazy ideas like taking a face wash and tooth brush to the main building, and freshening up in the morn, using the water which is available in plenty there.

6. You get to check out all the loos on campus - on other wings in your hostel, the ones in other hostels, the ones in your dept etc.

7. You can publish a book titled - "A comprehensive survey of bathrooms on the campus of the Indian Institute of Science, Bangalore and classification of the same based on water availability and hygiene"

8. You get to play your role in the water conservation movement by not taking the daily bath.

9. You can opt to be a subject in trials for perfume and deodorant companies.

10. You appreciate the administration's successful efforts in making you empathise with the under-privileged, who have to struggle for the water on a regular basis.
Posted by Bastet at 9:57 AM 10 comments:

There was a murder in the area I live, and it happened in broad daylight. The victim, was a veteran, who had lived for decades, braving the odds. The assailants were many; young muscular men in the prime of their youth. They hacked at their victim, who still stood strong and needed several blows from several men before showing the first signs of tottering. It looked like the victim was a practiser of ahimsa - not once was there any retaliation to the torture that was being inflicted. There were several passer-bys, silent witnesses, who gave the carnage a fleeting glance, not pausing to help, lest their busy schedule be upsetted. As the victim stood swaying under the heavy onlaught, the henchmen under the supervision of the boss, lassoed the victim and pulled, until, the poor thing could stand no further and finally, toplled over - a silent corpse. Friends and family stood rooted to their spots, in silence and shock; unable to help their loved one who now lay lifeless on the ground. Not that there would be any use if they spoke - who would hear their plea when the Government itself was ordering their elimination. The victim's brother, who was next in line, bowed his head silently, and let his body be subjected to the assailants' attack . And, people continued to pass by silently, without sparing a thought for the lovely huge tree that was being brutally chopped down to make way for a useless underpass.
Posted by Bastet at 2:22 PM 7 comments: