My battle with the bulge dates back to the time when I wasn't even born! Amma recounts of instances, during her final stages of pregnancy, when people would caringly ask her if she was having twins. But, only I was born - ek ladki kitne ke baraabar hai .. Do !! :)
Genetics tells us that the phenotype or the external appearance is an effect of both the genotype and the environment. I guess, God gave me a raw deal by putting both genotype and the environment against me. I am from a family of well-built or rather "Healthy" people. Coupled to it the fact that I am from South India [= "Rice eaters"] eating konkani food [= lots of coconut]. Add to it , Amma, who, along with being an excellent cook, is one of those people who ought to be named Annapoorna.
As a kid, I have given my mother loads of woes, by sleeping beautifully through the day, and staying awake the entire night, not letting her sleep. But, whatever be such petty problems, I am sure, she never got a chance to voice the popular crib - "My baby refuses to eat" !! I have childood pics of mine, clutching a teddy bear, where it is a bit difficult to decide who looks more stuffed ! :D So, with loving care, I grew up to be this well-rounded personality.
By the time I entered my teens, I joined the bandwagon of people who were figure conscious. Sure I had a figure, just that it was round [cliche, but, what the heck!]. Several innocuos comments and few blunt ones by people would prick. Like, a teacher's very subtle remark "She's a big girl" to the usual "fatty" kind of teasing by classmates. So, then began a series of diets . The 'No-sugar-at-all' diet, 'No-rice' , 'No-fried-food' and what not. Then , like a boon from the heavens came the "Seven-day-diet" . It had the following pattern :
Day 1. Just fruits, no bananas allowed, eat lots of water-melon, if available.
Day 2 . Just vegetables. No fruits allowed. No tomatoes allowed.
Day 3. Fruits and vegetables, still, no bananas and no tomatoes.
Day 4. Bananas and milk. You were allowed just 8 bananas and 4 glasses of milk in the day. Eat water-melon if still hungry.
Day 5. Fruits and vegetables. Today you were allowed a cup of dal as well.
Day 6 and 7. Fruits, vegetables (tomatoes included) and a cup of rice.
On all the days, you have to drink atleast 8 large glasses of water. And, no mention of exercise, mind you!

A friend had tried it and lost 3.5 kilos in a week. It seemed too good to be true. I took it on. Day one was good. I liked water melon and it was refreshing to eat fruits and my system felt relaxingly free. Day 2 was tough, but I grit my teeth and got through with it. Following days were bearable, but still, sometimes , a tremendous urge to bite into a cookie or a chocolate would overpower me, but my will power [or rather , 'wont' power] was strong, and I got through with the diet. Yippee!! I, too , had lost 3.5 kilos!! The human is a greedy animal and so, I took on another week of dieting. By now, water-melon was not all that interesting, infact, by the end of the week, it's very smell made me want to run away. The challenge of sticking to the diet while the rest of the family feasted, made me grumpy and I was almost biting-off heads of people who dared to suggest that I give up the diet. By the end of the second week, which came painfully slowly, I had lost just 1.5 kilos, which was good, as I , or rather, my family, couldn't have survived a third week of the diet. With the end of the diet, came the binge ! Never before had idlis tasted so delicious, as they did after the diet! I was so much filled with joy, to be back in the world of normal people, people who ate substantially, enjoying what they ate; that I celebrated a bit too much and put on all that I had lost, and even a bit more!! And, sadly, to date, I have not been able to regain my lost love for the poor water-melon.

Then came the Aerobics classes. I must say, I enjoyed those. Peppy music, interesting exercises and a hunky instructor - how much better can it get! The only thing striking a discordant note was the timing- class was at 5:30 AM. Still, with tremendous perseverence I stuck to it for 3 months, sacrificing the beautiful early morn sleep for a greater cause. Then, came winter and together with it, came my term exams. A 'temporary' break taken then, soon morphed into a permanent estrangement.

When I joined hostel, I guess I was the only one who wasn't too upset to be away from home food. Must say the mess dished out at our mess has aided a lot in the loss-of-appetite. This along with the increased physical activity here [= lots of walking] did result in a slow but steady reduction in body mass. Greatly encouraged by the recently-become-baggy jeans , I went home, expecting to be greeted by "Kitli sapoori zallya! " [For the konkani illiterate junta, this translates as "how slim have you become!" ] But let alone any such exclamations, even after being asked point blank, Amma just fixed her eye on me for a few seconds and concluded - " Makka kayin kalna " [ = I cant figure out any change] !! Hah, woe betide me! 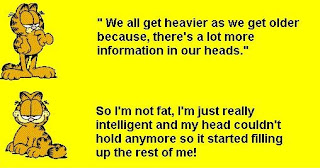 So, now, finally, I stopped trying to actively lose wieght. Eat healthy- dont starve, but dont binge- is the mantra. Now, I've taken to jogging as well, and if I survive the rate-limiting step of getting out of bed in the winter mornings, I really do enjoy it. And, to be true, it seems to work ! I guess the Lord up there is a bit of a prankster. When I struggled to lose, He made sure I didn't - and, finally , when I made peace with my body, and backed out of the battle, He , too, gave in and is letting me have what I wanted :) Well, anyway, who's complaining!!
Posted by Bastet at 12:10 PM

I have childood pics of mine, clutching a teddy bear, where it is a bit difficult to decide who looks more stuffed ! :D So, with loving care, I grew up to be this well-rounded personality....

ROTFL...you can call it a teddy bear effect

Loooved the garfield bit too. :D. I have a new explantion for now on, if someone asks me about the steady increase in my weight ;)